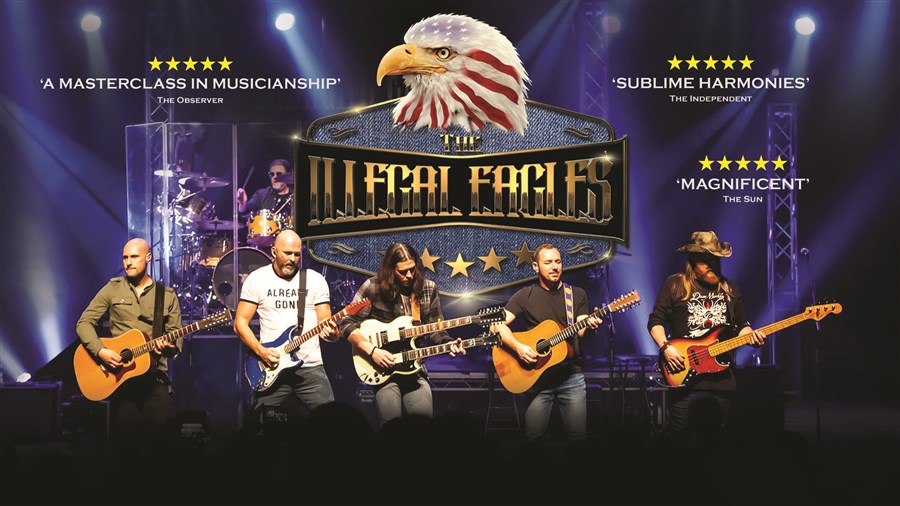 Celebrating the music of the legendary West Coast Country Rock band, The Illegal Eagles return in 2020 for another outstanding show promising more of their trademark musical prowess, acute attention to detail and incredible showmanship.

This critically acclaimed show features the very best from the Eagles’ catalogue of classics including ’Hotel California’, ‘Desperado’, ‘Take It Easy’, ‘New Kid In Town’, ‘Life In The Fast Lane’ and many more…

“A MASTERCLASS IN MUSICIANSHIP” – The Observer

Garreth, Greg, Trevor, Mike and Christian effortlessly capture the vocal style and delivery of Henley, Walsh, Fry, Schmidt and Meisner and are masters of their respective instruments.

The power-house rhythm section of Kiley and Newnham has added a dimension that is sensitive to the subtle needs of the Eagles’ songs and kicks hard where necessary.

Highlights of the Illegal Eagles’ 21 year career have included tours of Europe, Asia, Russia and the Caribbean, whilst in Great Britain they have performed at all the major concert halls including The Royal Albert Hall and The Cadogan Hall in London, St David’s Hall Cardiff, The Royal Concert Hall in Glasgow and The Waterfront Hall in Belfast.

All the classics are featured during the 150-minute show - Hotel California, The Last Resort, Life in the Fast Lane, Tequila Sunrise, One of These Nights, Lyin’ Eyes, New Kid in Town, Take it to the Limit, Rocky Mountain Way, Witchy Woman, Heartache Tonight and songs from "The Long Road out of Eden"