Temptation in The Temple 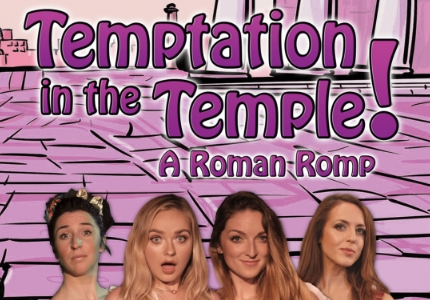 TEMPTATION IN THE TEMPLE

Making a return to The Plowright Theatre after the popular Roman Romp which visited in June 2019, Temptation in the Temple is a carry on of this hilarious play.

The company that has created a cult following around the UK with his brand of Adult Panto will be visiting in the summer with their farcical adult comedy, TEMPTATION IN THE TEMPLE.

At the Temple of Vesta, ‘celibacy’ is a way of life. However, for reluctant virgin, Frigella the Fulfiller, this means her only chance at ‘Shagamus’ is to escape to the Temple of Venus next door. A fool-proof plan is needed and this must be expertly implemented to avoid a nasty punishment. Sadly, with Frigella’s well-meaning but charmingly stupid friend, Bimbus, things will never be straightforward, especially with the High Priestess, Virginia Creeper, suspicious of her every move!

“This combination of Up Pompeii, Carry On traditions and Panto elements could hardly fail to raise a titter or two - far more than that actually as the girls had the audience in stitches throughout and rightly so.” – Choice Radio, Worcester (on the 2019 Roman Romp).