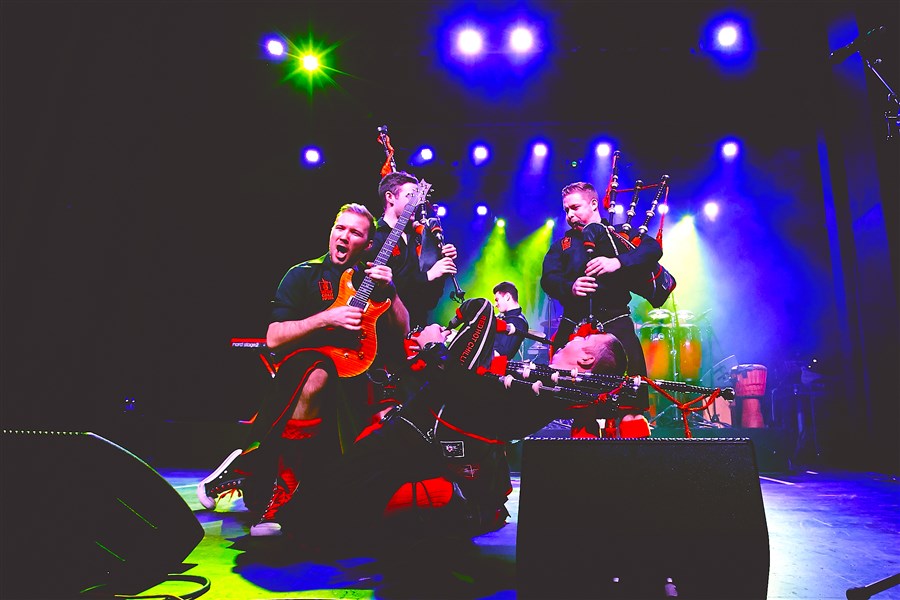 The planned Red Hot Chilli Pipers show which was due to take place on 14 May has been postponed until 7 May 2021.
We are in the process of contacting all ticketholders. Tickets remain valid for the new date. We apologise for any inconvenience this may cause.

The most Famous Bagpipe Band in the World, ever!

There has never been anything quite like The Red Hot Chilli Pipers, from their formation in 2002 and a cameo appearance at T in the Park in 2004 with the Darkness to opening the main stage in their own right in 2014. The past fifteen years has seen the Red Hot Chilli Pipers become the most famous bagpipe band on the planet..ever! Bagpipes with attitude, drums with a Scottish accent and a show that carries its own health warning.

The bands achievements have reached incredible heights with their groundbreaking fusion of traditional Scottish music and rock/pop Anthems which they proudly call “Bagrock”.The Red Hot Chilli Pipers are a genuinely unique experience.

The Chillis have never been more in demand for their infectious style of feel good music which appeals right across the age range to people all over the world. They have collected together an impressive group of musicians, dancers and singers from Scotland and further afield, many holding World Championship titles and all seriously good players with impressive credentials and qualifications.

In 2014 The Chilli Pipers released a new live DVD and CD entitled `Live at the Lake`. In an explosive evening of entertainment captured on this live DVD and CD, The Red Hot Chilli Pipers recorded their most adventurous project to date, bringing 16 musicians and dancers across the Atlantic to perform at Milwaukee Irish Fest, the spiritual home of the band in the USA. They captured the unique and explosive power of  the Chilli Pipers in one unforgettable evening by the shores of Lake Michigan. Tracks include .Insomnia, Gimme All Your Lovin' , Thunderstruck, Everybody Dance Now, Amazing Grace, Fix You, Chasing Cars, Wake Me Up , Don’t Stop Believin and We Will Rock You.

During the winter of 2015/2016 the Pipers recorded new tracks and  released  a new studio album – “Octane”. It represents a high energy, powerful, intense and hopefully inspiring album that the band  aspired to create. “Octane” is a continued fusion of traditional tunes and rock classics, taking Bagrock to a whole new level which The Red Hot Chilli Pipers are proud to share with you!

In 2018 / 19 The Red Hot Chilli Pipers will continue their World Tour with stops in the UK, USA, Germany, Hong Kong, Ireland and many more , check the Band´s website for regular updates.

Some facts and figures about the Red Hot Chilli Pipers

Gold disc for over 100,000 uk sales of their first album - `Backrock to the Masses
To date , The Red Hot Chilli Piper have performed  live to over 1 million people
Triple platinum status for the album and DVD - `Blast Live`
Awarded twice for `Best Live Act in Scotland`
Over 3.5 million on Youtube of their viral cover of the Avici track `Wake me up`
Sell out gigs and tours in USA, China,Australia,Germany,Switzerland and Australia
Winner of the BBC TV prime time talent show `When Will I be Famous` hosted by Graham Norton
A Big Hearted Scotland nomination for their charity work