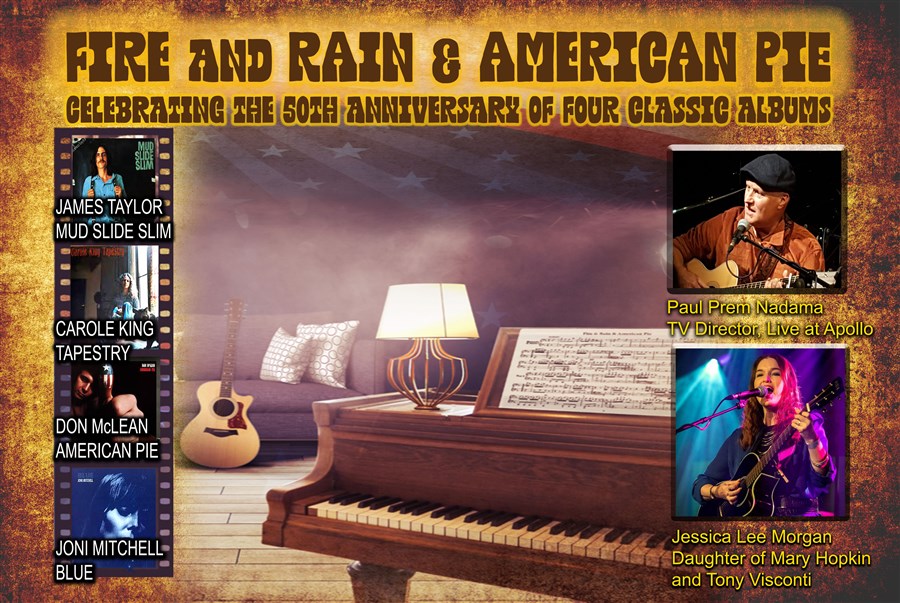 Fire & Rain & American Pie, which was due to take place at the Plowright Theatre in May 2021 has been rescheduled. It will now take place on Wednesday, 8 December 2021. Tickets remain valid for the new show.

A heartwarming, musical tribute to the great U.S. singer-songwriters of the late 60’s and early 70’s, featuring beautiful songs from James Taylor, Carole King, Simon & Garfunkel, Joni Mitchell, Don Mclean, Crosby, Stills & Nash, America, Carly Simon and more! Many of their timeless classic songs, from this special era, will be brought to life by a band of top musicians, along with an intimate nostalgic narrative. The band is fronted by Paul Prem Nadama and Jessica Lee Morgan.

Paul Prem Nadama is perhaps better known in the world of TV comedy as Paul Wheeler, Director of award-winning TV shows such as ‘Live at the Apollo’ and ‘Have I got News for You’. So with ‘Fire & Rain & American Pie‘ it could be said he is bringing  ‘Have I got Tunes for you!’ to a live stage show where Paul pays homage to many of his teenage musical inspirations.

Paul is an accomplished guitarist and singer-songwriter playing at intimate venues around UK and Europe. Recent appearances include the Edinburgh Fringe, Brighton Fringe and many festivals with many bands of various musical styles. His relaxed acoustic soul and contemporary folk style has often been compared to James Taylor and Paul Simon; combined with his finger-picking guitar techniques and soft voice which touches the hearts of many people on any size stage.

Jessica Lee Morgan is a whole-hearted singer-songwriter who doesn’t beat about the bush. Jessica was raised on rock and folk by her parents, singer Mary Hopkin (‘Those Were The Days’) and record producer and musician Tony Visconti (Bowie, Bolan, Strawbs, Ralph McTell and more).  She performs her own forthright songs with acoustic guitar and percussion strapped to her army boots. Jessica is a regular with her father's Bowie supergroup Holy Holy and has recently supported The Blow Monkeys and Robyn Hitchcock.

Christian Thomas currently plays bass with Jessica but has played in various bands for the last 25 years. He is a recording engineer and works regularly with Jessica and her mother, Mary, and with many others in the past.

Vikas Botsford, has been a session keyboard player for many artists and a regular on the London music scene since the mid-seventies. He appears regularly with World-renowned New-age singer-songwriter Miten.