A Vision Of Elvis 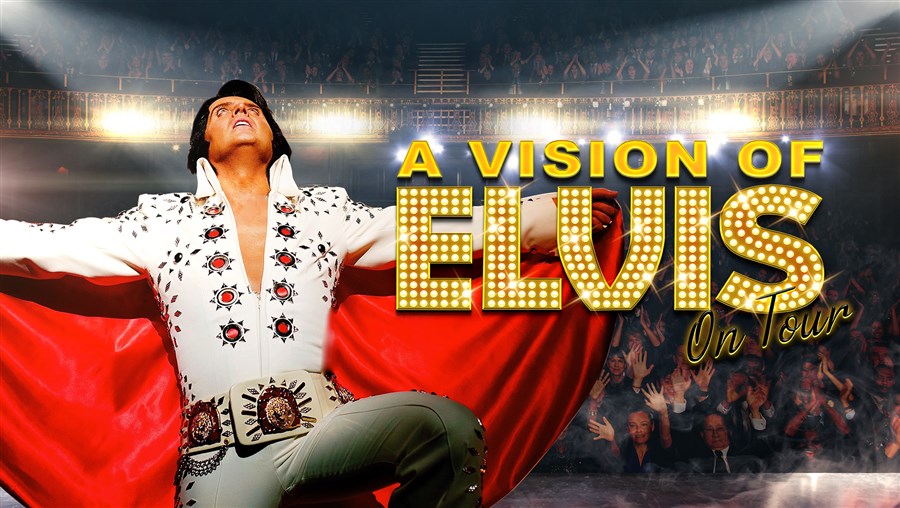 * Please note - this event has been rescheduled to 17 October 2020. Tickets remain valid. *

Long-time Elvis friend, photographer and tour manager, Ed Bonja, was profoundly affected by Rob's performance, remarking: "He sings like Elvis, but most importantly, he seems to capture the very soul of Elvis – his charisma, his gestures – hell he even walks like Elvis!"

A Vision of Elvis on tour has performed to thousands of fans in major theatres, festivals and arenas worldwide and making history by being the first Elvis tribute artist to perform at the New Wembley Stadium - to over 50,000 people.

It’s 1968 – the major musical event of the year is the first live TV special for Elvis Presley in what would come to be known as The ’68 Comeback Special. Drawing phenomenal ratings, this event re-establishes Elvis as the major entertainment star of the decade, and twelve months later Elvis stars at the International Hotel in Vegas, performing live for the first time in seven years, and securing his place in history as the King of Rock ‘n’ Roll.

This production celebrates that TV phenomenon and is a testament that his songs live on and the King still rules.

A Vision of Elvis recreates the drama and intensity of that 'Comeback' monumental concert and proceeds with the King to his Vegas debut, the electrifying Concert Years, featuring Elvis’ greatest hits including, Heartbreak Hotel, Blue Suede Shoes, Hound Dog, Jailhouse Rock, All Shook Up, In The Ghetto, Suspicious Minds, American Trilogy and many more.

All costumes, instruments and stage setting are authentically recreated to give the feel and energy of a live Elvis concert, which promises to be the ultimate experience for any Elvis fan the world over.

Rob’s contact with the audience is immediate – as soon as the concerts begin, surrounded by his outstanding musicians, backing vocalists and production team they take the audience on an emotional roller coaster through time and in doing so, engage audiences with a true Elvis Concert Experience.

With a string of SOLD OUT UK dates, A Vision of Elvis – IS the ONLY Elvis show to see.

“Entertaining, enthralling and electric” The Latest.co.uk