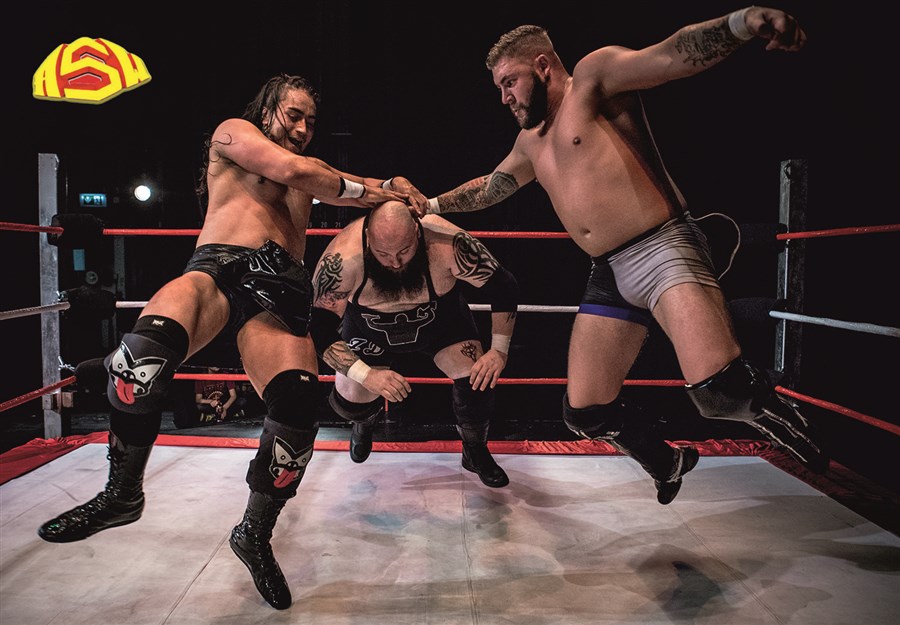 The planned Super Slam Wrestling event at The Baths Hall on 14 March 2021 has been postponed. It will now take place on 24 October 2021. Original tickets remain valid for the new show.

AFTER suffering a Covid-19 knockout from March last year, wrestling is finally returning with All Star Superslam back at the Baths Hall, Scunthorpe, on Sunday 24 October for a line-up including qualifying matches in an exciting nationwide tournament to decide new British tag team champions.

The action begins at 3.00pm and four top pairings will feature in a series of three matches to determine who will go forward to contest the final stages of the event in late October with a draw for Scunthorpe opponents taking place as the event opens.

Three well-established teams, the UK Hooligans, the Henchmen and the Pitbulls will battle it out against a new pairing consisting of Devon-born former Superslam solo champion Oliver Grey who has joined forces with popular Merseysider Dean Allmark.

The Hooligans, Norwich-based brothers Roy and Zack Knight have been wrestling since their early teens encouraged by their father Ricky Knight, originally a tag force himself when partnering Jimmy Ocean in the Super Flys combination, and now Roy’s own son is wrestling with success as Ricky Knight junior in tribute to his grandfather.

The Hooligans partnership took off towards the end of 2010 and they were soon into a fierce rivalry with the 40 stones Henchmen, a Coventry-based team consisting of Jim Diehard and Benton Destruction who came to the fore after making an All Star debut during 2017 and have also achieved success on the Continent, most notably in Germany’s annual tournaments at Hannover, while at home their clashes with American invaders Harlem Bravado and ‘Vampire Warrior’ Gangrel are remembered by all who saw them.

The most-weighty team on view will be the East Coast’s notorious Pitbulls consisting of Mike ‘The Bulk’ Waters, Britain’s biggest current ring battler at a shade under 40 stones, and his brother Dave Waters who has made a successful wrestling comeback after two years on the sidelines due to an injury picked up when taking part in a Strongest Man event.

There’s little doubt that the Grey-Allmark combination will be getting maximum crowd support as they pick-up the tag team strings after both concentrating in solo contests in recent times, Allmark also spending time as head coach to All Star’s highly rated training school at Bromborough, Wirral.

The programme will also include two solo contest featuring established stars against new prospects and tickets are now on sale at the Baths Hall. For further information visit the All Star website at: www.superslamwrestling.com or go to All Star Wrestling UK on Facebook.

Please note doors open at 2pm and the event starts at 3pm.